A painting through the Stages

Here's one of my paintings through it's stages to completion with a brief description of the process involved.

Like much of my work it has been painted on wood which has been primed with a gesso ground (a base layer of acrylic paint). I allow the several coats of gesso to create a random brush worked texture, this ultimately give the final painting extra depth and interest on close inspection.
* 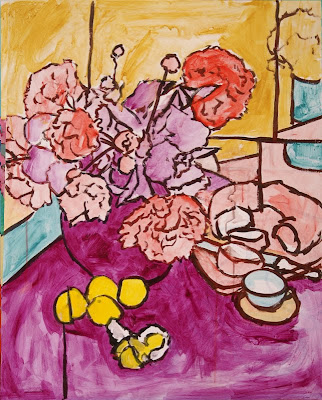 Stage 1 - Really this shows stage 2, the first stage would be marking in the outlines in this case with a mixture of cadmium red and burnt umber. The next stage as shown above is then to wash on color, knocking away the white canvas/board. On starting a painting I have a pretty clear idea of the final colors I want, so will either paint compliment colors underneath or secondary colors.

Care needs to be taken at this stage not to make a color tonally to saturated, since it will obviously effect greatly the luminosity of later stages of paint.
* 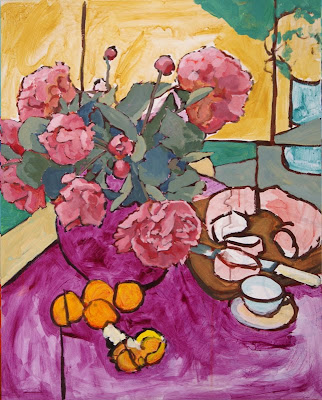 Stage 2 - Here some of the color has been placed in loosely on some objects such as the oranges and some areas of the background. But most attention and painting effort has been given to the Peonies. Since the flowers were the key to this painting I wanted to tackle them first. Additionally they're really the most complex part of the painting so required most work to get right.
* 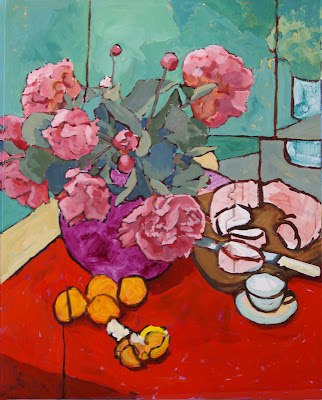 Stage 3 - Other broad areas are boldly painted in. Notice how in the red cloth I have intentionally let the purple undertones shine through, this adds depth to the final painting.
* 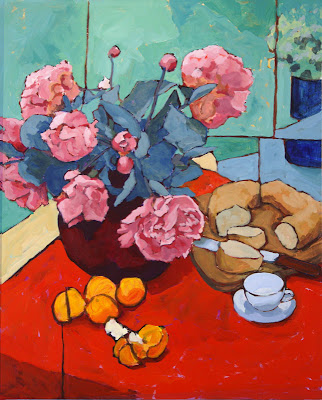 Stage 4 - Mostly there now. All areas have been painted and there's only small areas to refine. The flowers in the back right need to be resolved, careful decisions are made on how refined and detailed to complete them. I try to remember to keep them subdued and loose since the focus should be on the foreground.
* 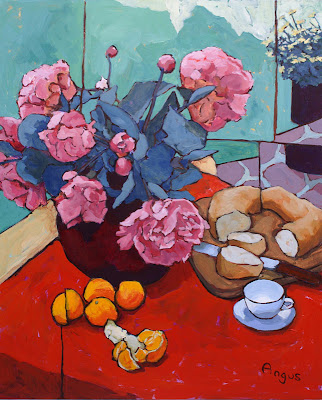 The Complete painting - This proved an unusual work for me, since there was little adjustment in the painting. It's common for me to rethink and evolve a painting as I work on it; usually this means changing the color of something away from my original color plan to enhance the final work. Sometimes it requires something more drastic. This painting however remained consistent through it's entire process.
Posted by Angus Wilson Studio at 9:53 PM