The instant appeal of portrait painting

There's something both refreshing and engaging about painting a portrait. I do it so rarely, but each time I take on the task I get instant enjoyment and pleasure from the challenge of the task. There's something about mainpulating the likeness and responding to the intimacy of a human face.

This painting is of my 'muses'- my boys. It's from a photograph taken while we stayed in a hotel, near Disneyland. The boys having to share a bed, my youngest always complains that his brother takes up too much room! I find I know their faces so well that I am the harshest of critics and instantly know if theirs something about the painting that isn't quite right. 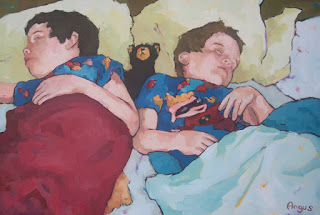 As the painting developed I actually had to reworked the flesh tones throughout, quite a task. I'd originally painting them too warm and red, and it looked as if they'd spent too long in the sun!  Most time however was spent fiddling with the red blanket in the bottom left. It had a sporting design which I tried to capture softly, (so it didn't detract from the focus). However I found the design too strong and it drew the eye. When I painted it softer it just seemed poorly painted, so I went with a plain red instead; but capturing the right tone was a skill. Too strong and the eye was drawn to that corner of the painting, too muted and it looked like a muddy mix. In the end I found a balance between these tones. 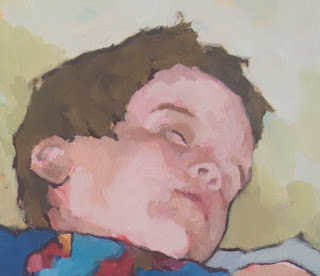 Posted by Angus Wilson Studio at 10:26 AM