from Awilson to Angus

When I moved back to America I brought with me a significant amount of art I'd created in Scotland, some are still around and I thought it would be nice to share it on the blog, since it's interesting to compare changes with this work and more recent paintings.

(NOTE: all the painting featured on this post are from my period in Scotland) 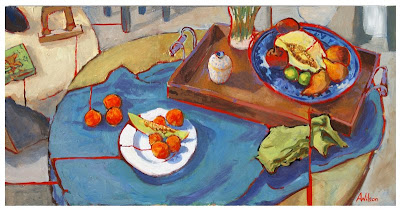 Change
An artist never stops learning, they're always 'moving forward', always developing, always honing their skill (even though at times it may not feel that way).

However, I was recently reminded that at times an event or a circumstance can dramatic change an artists work, and from that moment on the artists work is noticeably never the same again. There are many great examples in history of dramatic changes to famous artists, but since this blogs about my work I'm not going to write about them!

Looking back I realize there was a fairly significant change to my work about 3 years ago when I moved from Scotland back to California. There were a couple of quick and obvious changes -

Lanterns with easel and orange drape & apricots in a bowl
Viewing paintings from both time periods I think there's something to enjoy in each, indeed I find many people respond to the new, but others like the palettes and compositions in the earlier works. So, the big question in this blog entry, do these changes amount to a dramatic change in my work, or just another chapter of growth and change, I suppose only time and history will tell? 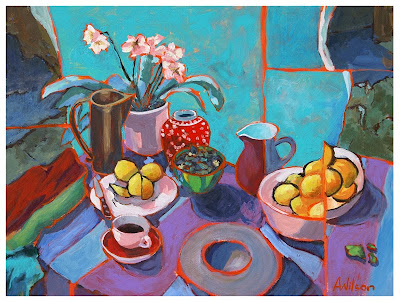