As some of you will know, I've been enjoying a few weeks vacation back in Britain. Primarily a family holiday we've been on a frantic schedule of traveling up and down the country visiting friends and family. I debated at great length whether or not to take my painting materials with such an aggressive schedule but in the end opted to simply pack a sketch book and my camera.

Catterline Harbor (or Harbour, when in the UK)
Despite this lack of art creation it's an impossibility for me not too sneak in a little art viewing here or there.  As luck would have it my brother now lives in Catterline a small village just below Stonehaven, (south of Aberdeen).  Catterline is an important location for the history of Scottish post war art scene, chiefly because my favorite Scottish artist Joan Eardley spent much of her life living and painting there. 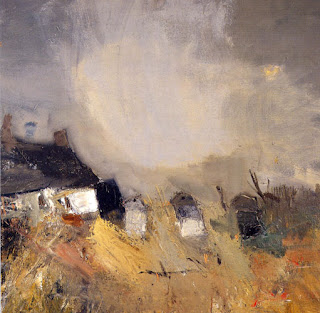 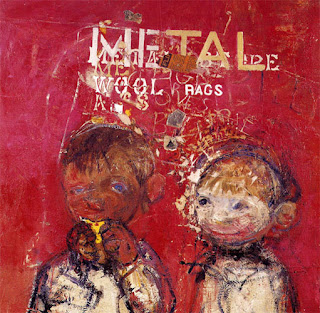 Children & Chalked Wall
J Eardley
Eardley,  painted in the area for roughly 20 years and produced a great array of paintings, known in equal measure for her depiction of Glasgow children and the rugged seascapes and landscapes of the Catterline area. While in the village, my sister-in-law (Kathryn) was fantastically thoughtful, and arranged for me to visit a home of a collector who had two Eardley works, an oil and a lovely pastel. Later we dined in the lcoal pub, which houses the communities Eardley painting. But best of all was the village to 'the Watchie'. 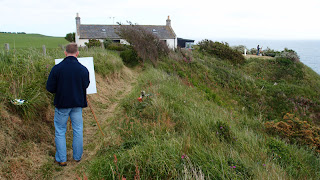 An artist painting the Watchie
The Watchie is a beautiful, little cottage with very basic amenities stuck out above the harbor on a rocky bluff. The building is called the Watchie because it was originally used by the coastguard to keep watch for Smugglers. Eardley spent much of her time painting from there and the surrounding area. Since her death in 1963 a number of other artists have worked in the Watchie, and in recent times it has had a number of artist residencies. For the last 5 years the Scottish artist Stuart Buchanan has worked there, he also lives in a near by cottage that Eardley at one time also owned.  Kathryn had again come to the rescue and arranged for me to visit Stuart and the Watchie.

Stuart was fantastic and a great guy, he gave me hours of his time and we enjoyed talking about the history of the place and our own painting lives. Stuart was a graduate from Glasgow's school of art and he produces very thoughtful work often from his imagination, painting solitary or grouped figures  in sparse environments, that convey a sense of atmosphere and solitude. 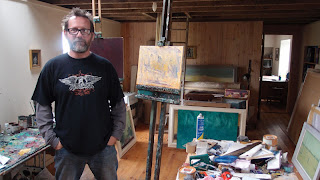 Stuart in front of his easels in the Watchie 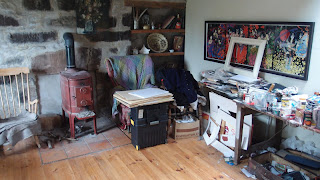 The other view of the room.
One thing you are struck with at the Watchie is that there are no distractions. There's power for lights and a wood burning stove for heat and that's about it. From the windows you can see the wild garden and the ocean and ever changing light on the cliffs and ocean. It must be a fantastic place to live and work and impossible not to change and be affected by such an atmospheric environment.  It's a far cry from my kind of studio and views from my window!

Stuart and I talked for hours and I would have loved to have stayed longer, but I was probably getting annoying!   Stuart has a forthcoming solo show in Berkshire during October at the “Modern Artists Gallery” ( www.modernartistsgallery.com ), so if anyone is in the area his work is well worth a look or purchase? 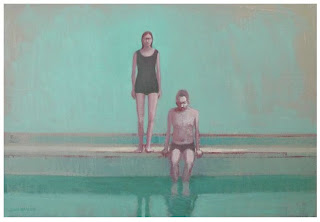 Poolside
Stuart Buchanan
oil on board
17 x 24 ins.
Posted by Angus Wilson Studio at 2:17 AM