Recent commission looking back into the past

Over the last month or so I've completed two separate commissions that were notable for a couple of factors. First they both involved looking back to past works to base new paintings from. Additionally they were also faithful recreations of the original paintings.  (More commonly my commissions feature brand new subjects or reinterpretations of a subject). Indeed, I often try to steer a collector away from this 'copying' of an earlier work; however in this instance I ended up working on two paintings with very different styles and subjects, but with very similar MO's. 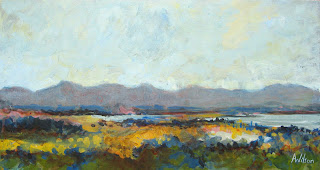 The first of these commissions was completed for a collector who has gathered a number of my still life paintings around her home, but had fallen in love with a painting of Scotland that I did about 6 years ago. The painting features a view of the West Lothians, which is just a little west of Edinburgh (for those who like to get the geography right). The original hangs in my home and my wife and I are very attached to it, so we agreed to reinterpret the painting in a larger size. 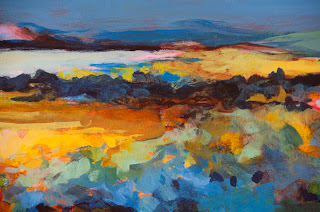 It was a good challenge to paint with some techniques needing to be remembered or rediscovered. For example, the original sky had used a dark rich under painting color with strong opaque colors placed over the top. This was a technique I hadn't employed in a long time so it was fun to re-remember this and to exploit it. Also since the new painting was considerably bigger than the original, I had to reinterpret how much information to place in the painting, while still keeping the loose/ abstract feel. More detail and accuracy was applied to the hills and and stronger sense of color was given to the middle ground, since the painting was to be hung up high in the home and I wanted the color to bring the painting forward in the room. 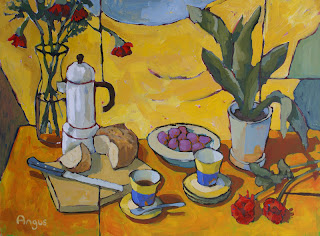 The second commission was completed for a couple who had fallen in love with a painting they'd seen in New Masters Gallery in Carmel. They loved everything about this painting, except for it's choice of flowers. So we talked about many ideas and alterations, but in the end the collector decided they wanted a very faithful interpretation of the original painting, with only that single minor change. 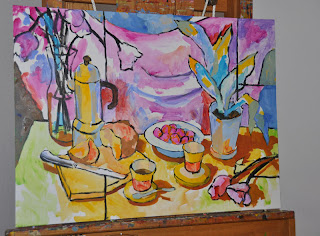 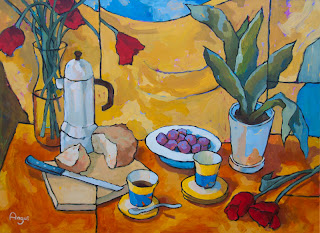 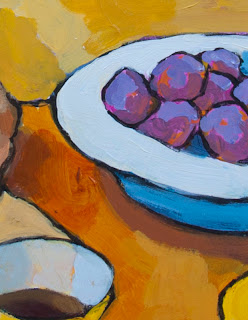 detail of finished painting (shows the nice under painting, poking through)

Not sure if I really needed too, but I spent great care in getting everything in the 'right place' including replicating poor AKA 'artistic' perspective where I saw it. My reinterpretation gave me the opportunity to place a little more contrast across the back drop cloth and a richer table cloth, but otherwise was extremely close.
Posted by Angus Wilson Studio at 1:54 PM