For me, to be a colorist gives me exceptional freedom and opportunities for creativity. It's what really inspires me within a painting, the limitless options and opportunity I have simply by manipulating the color.

Many contemporary colorists fall into the trap of painting with a limited tonal range, strong colors in similar hues, perhaps with only one or two other 'key colors' placed to create drama (these are often complimentary colors). This can make for dramatic and emotional work, but it can also miss an opportunity. I feel there's a wealth of options available to us when we choose to adapt and change colors within a subject.

Often I like to approach my color adaptations by finding a single element (or perhaps the lighting) within the scene that inspires, and then manipulate all other colors around that theme. The color of a few or many elements may change, some slightly, others dramatically. Working from this single element or concept and relating that to other elements within the scene, adjusting colors as appropriate.

This method can produce dramatic eye catching paintings, with strong colors but with a wide variety of color too.

From time to time I enjoy using this technique, but working from a more subdued palette range. Producing something that has arguably a less challenging or showy presentation, this I feel presents a nice contrast to some of my more 'punchy' palette choices. Of course, in this painting it's not completely understated; I couldn't resist making a dramatic red back cloth, but other colors fall into line with that color choice - 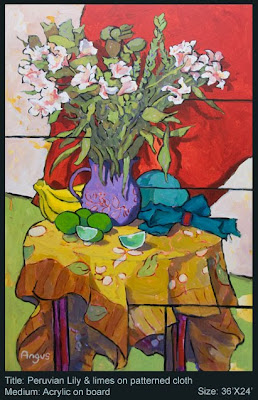 As you can see from this detail below I changed the coloring on the fabric dramatically, but were often I would have used dramatic color, I chose muted earth based tones. 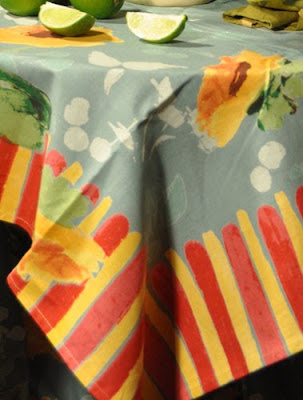 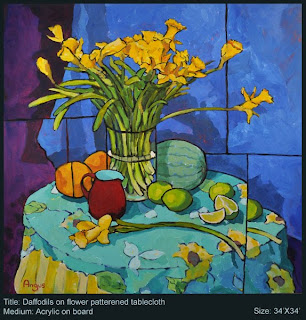 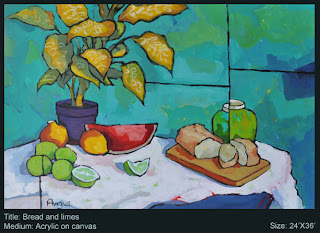 Posted by Angus Wilson Studio at 7:33 PM No comments:

At the risk of waffling a bit - as an artist I believe it’s important to have an area of focus for ones work. For me part of that process is a continued exploration in the subject. For a good number of years now I’ve found myself continually energized by Still Life subjects and I’m always finding a new method to dissect the subject or a new color plan; thus re-exploring the same subject never gets dull. I do however paint a lot of Still Lifes, and it raises another point. To often a singular focus on the same subject for too long can ultimately lead to the works losing their edge and they become less than they should be. To that end, I believe it’s crucial for artists to dabble and explore other artistic endeavors, (to move out of their comfort zone). For it is through this journey that we often grow and develop, bringing new, fresh ideas and even skills back to the original concept/focus.

So to cut a long story short, from time to time I tackle something dramatically different that challenges myself artistically and so here is my most recent challenge –

Painting a portrait is pretty much as far removed from my normal day-to-day painting as I can get. Additionally because of this dramatic departure from the norm it always proves to be a great but rewarding challenge.

The brief I set myself was simply to paint my two children as a double portrait. I’d previously painted them together in May 2005 and I felt it was time to tackle this subject again, before they became too old and I missed a beautiful phase in their growth. 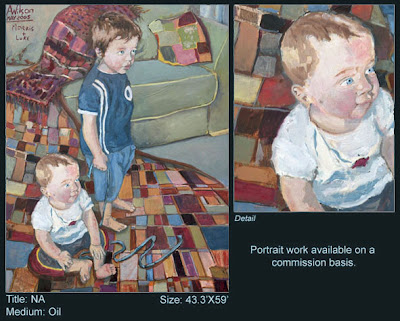 Above shows the painting from May 2005.

I set out to attempt to paint in a different style to the method I had used previously. This was achieved by borrowing from one of my heroes. Joan Eardley’s work has continued to resonate with me through the years and I love her portrait works of Glasgow’s impoverished children. I particularly remember visiting the portrait “brother and sister’ in Aberdeen Art Gallery as I grew up. I chose to borrow this composition for my portrait, knowing that this would immediately set me off in a different direction from my previous portrait. My original intension was to paint in an equally loose and free style as Eardley; but as I worked I found myself unable to keep things as loose as she was able. Over time I had to rework and move away from my original concept, but ultimately produce something that was very different from 2005 rendition. 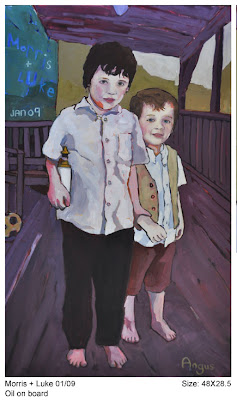 I consciously gave the portrait a flatter appearance and kept the colors fairly close in relationships as a color/mood contrast to much of the ‘Still Life’ paintings I currently produce. I may not have been able to produce as loose a painting as I may have liked (sheer cowardice to blame I suspect). However, I’m fairly happy with the end result. There’s pretty good continuity across the painting and it captured them both reasonably. I feel this time I slightly missed the mark with my youngest child Luke, though it’s still him. I partly blame this on the expression I chose, in retrospect it perhaps wasn’t a characteristic one? 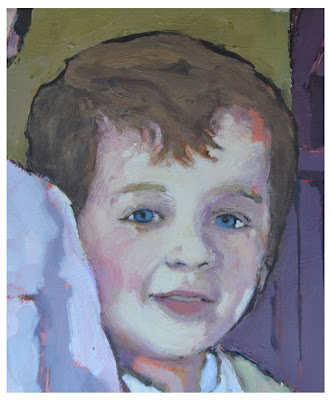 It took me a full year to complete this painting so already the children have grown and changed from this point. Various delays and many weeks at a time when I would let the painting sit in my studio, semi-finished; has probably flied in the face of my originally argument of ‘tackling different subject’. Certainly, I feel for challenges such as this to have their greatest impact one should always really focus and explore the new direction, not dabble slowly as I have done here - Oh well, there’s always next time… :-) 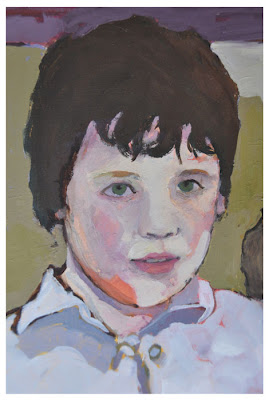 
Posted by Angus Wilson Studio at 8:44 PM No comments: