I'm in the process of adding another page onto my web site, quite a daunting task since the site was built and designed by a we expert. I'm now going in with my blunt hammer and trying to fit in another page... check it out!

http://anguspaintings.com/workshop.php
Posted by Angus Wilson Studio at 8:26 PM No comments:

Another painting from one of my favorite National Parks, well in this case National monument - Pinnacles NM. This isn't a classic view of the fantastic rock formations, but perhaps a good example of hot Californian scrub vegetation?

I finished this one twice, the first time it sat around looking complete. It was only after photographing it and shrinking the image down, did I see a way to improve the composition. Primarily one of the bushes was too regular in pattern, so I fixed that, and now it's much improved... 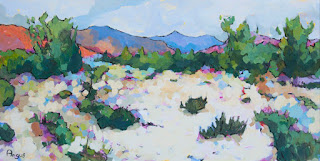 Paintings from the id!

I thought it had been a while since I'd photographed a painting as it progressed, so here's such an example. I also included lots of close up detail images, just for kicks and info.

Usually when working on a Still Life painting I work from original photographs of the subject matter. Sometimes, instead I like to look at an old painting of mine and re-imagine it; perhaps in a different color scheme with the 'dissecting lines' in new locations. Occasionally I will also change an element within the scene, just to give me a little extra freshness and variety.

I find working from an old painting rather than a photograph gives me an extra layer of extrapolation. Its like having a really nice sketch to work from, and much of the thinking and form decisions have already been worked out. The end result means you can relax a little more and I tend to think this gives the paintings that have been painted in this method a subtly different look from my usual paintings. Both are good, but different.

Last week I decided to take this all one step further, I decided to build and entire painting from my mind. I started with a loose sketch of the type of composition I wanted. I then propagated the scene with various elements, generated from a mixture of memory and experience, others I looked at an old painting for reference. This exercise overall proved quite a challenge, especially early on when placing objects, within the composition. Originally I nested the tall dark vase with white flowers just to the right of the blue Delphiniums. I wanted everything to cascade from the center, but as I painted it, I realize everything was too busy around the the central florals. So I moved it over to the right and generate a circular path for the eye to flow (from the tall vase, though the flowers, down to the central jug and along the fruit 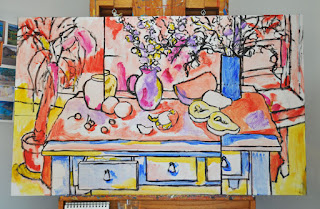 The strong line work of my composition has been committed to, and the colors plan finalized (in my head anyway); allowing me to place in a first wash of color. These 'underpainting' colors will later be allowed to play with the final colors that are placed on top. They will either compliment or react against the colors dependent on my choices and the desired effect needed. 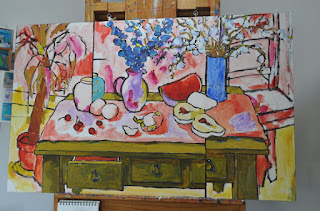 Moving around the painting,  - blocking in the color on the table and a 1st pass on the delphiniums with a little color in the vase on the left and the yucca trunk. (These early stages of the painting really taxed my brain, keeping the composition thoughts and full color plan in my head was a struggle!) 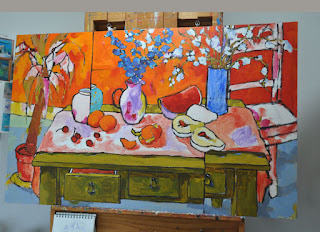 Bringing in the reds and oranges to give the painting it's warmth. Also finding an initial cool tone for the floor, later I adjust this slightly. 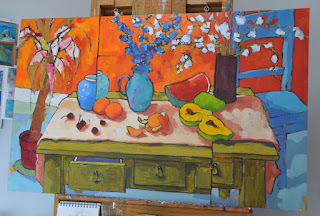 Blocked in a lot here, but getting the tones right on the table cloth was important. Also started to punch in the dark color on the tall thin vase. I have decided at this point that my strongest contrast in the painting will be this form, which will pull the eye to this object. 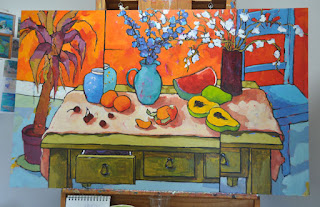 This section saw subtle refining of colors, for example the table top was lightened, some elements were cleaned up and the yucca purples were added. 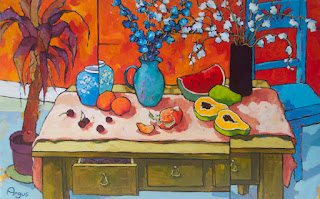 The devils in the details.... 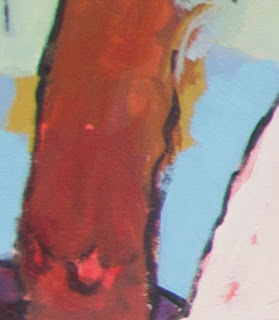 Less important areas of the painting are presented loosely and simply. The yellow ochre color around the edge of the trunk of this yucca plant, helps lead the eye over  and past the tall vertical. This is also a good example of an area, where the paint is presented relatively flat in tone and form, further allowing the eye to move to a more interesting area of the work. 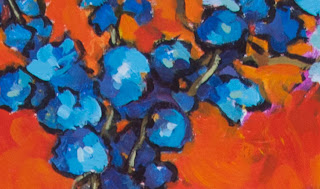 Just enough information is given in the delphinium. The way I wished to lead the eye through the painting, the flowers are an important part of the route, but not the focus. They need to be rendered, but not over emphasized. 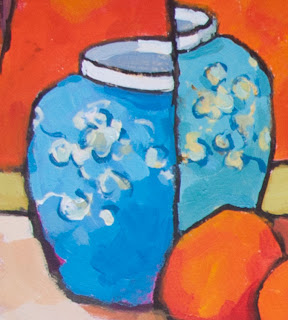 This detail shows a Chinese vase that I paint on occasion. I really needed some reference for this so borrowed from another earlier painting for the vases color and form. 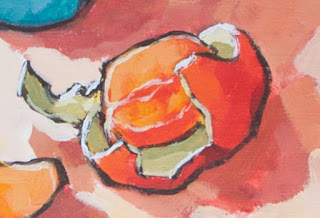 I love painting peeled fruit, there's something about the contrast of shapes/forms and tones. This is familiar ground for me, since I paint a fair amount of this subject, so I could just sit back and enjoy the moment.

This final detail I included here just to show up close how you can see the flecks of the 'under painting' shining though. I use this technique a lot allowing complimentary and secondary colors to shine though the final paint, creating impact and depth within a painting.

Posted by Angus Wilson Studio at 9:12 PM No comments: