One of the paintings from last weekend in New Mexico at Ventana Fine Art. Reworked the color of Tomatillo when I got home, made them stand out a little more, which created a 'color bridge' or 'stepping stone' from the vase to the table cloth. 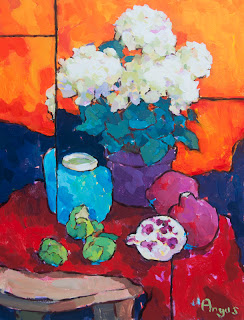 Just returned from a long weekend in Santa Fe, NM for a group show opening and the 'Paint Out' festival. I had a great time and met some old friends and made many new ones, I also got some painting done!

Here's a couple of pictures of some of my art in the Gallery (Ventana Fine art-(800) 746-8815). It's a beautiful gallery and the staff are wonderful, giving all their artists great space and light to make the works really look really nice! 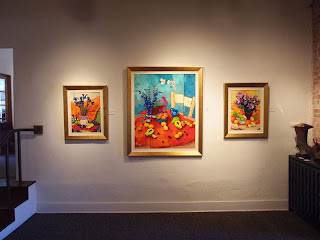 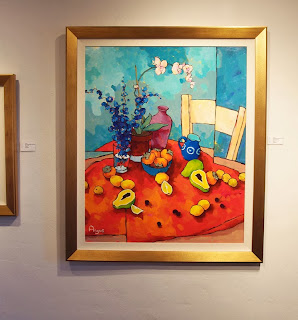 .
Here I am painting outside the gallery during the 'paint out' festival. It's a great event to visit the galleries in Santa Fe and there's so many artists to see in action. There's even a parade down the street! 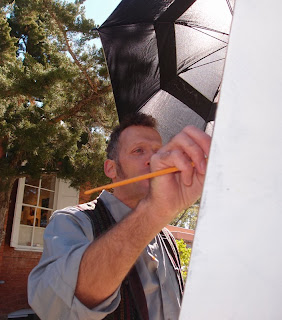 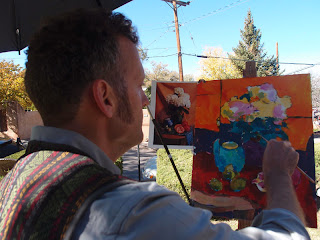 One of the paintings I produced and almost finished. 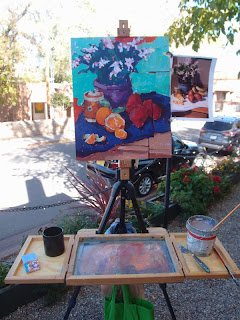 And finally, a shot of Ghost Ranch as the sun sets. I drove up there with my art friend Kevin Courter. We both took scores of great photos as the sun crawled across the valley bathing the cliffs in wonderful colors and tones.

.
Posted by Angus Wilson Studio at 9:10 PM No comments:

I know some poor people had to cancel for health reasons, and my thoughts are with them. But, it does mean we now have a few spaces available for my workshop. The gallery was offering $100 to the first few who called, this is a great opportunity if you're able to make it! 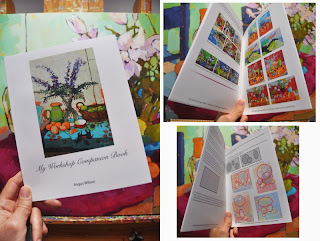 Posted by Angus Wilson Studio at 1:50 PM No comments: 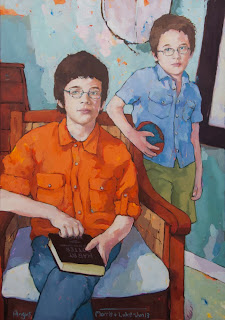 I'm pleased with the result, 4 years ago I loved the painting, but my youngest Luke never quite looked like himself.  This time however it's spot on. Indeed, since finishing the painting I've had it propped up against a chair downstairs, sometimes Luke will pass and do a double-take thinking Morris is actually sitting there. So that's a pretty good testament of a successful portrait.

I'd originally planned something looser. Of course my intention was to capture their personality or inner likeness, but perhaps not paint them quite so carefully and accurately.  In the end, as I painted I slowly moved towards a more careful considered painting and didn't catch myself to keep it loose and free. I'm not unhappy with this change, but too me I still notice the change from the original plan.

Here are two details of their faces. 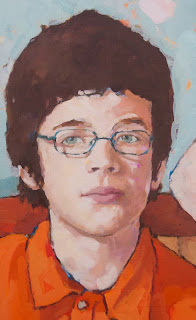 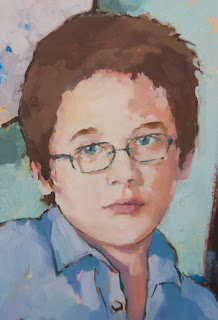 Near the end I'd worked a lot on their glasses. I'd originally blocked them in, right at the beginning,  gradually painting them away as I built up the faces. I found when I restated the glasses, they proved a challenge. I haven't, it turns out ,often painted glasses. So it took me a while to find what worked. I realized that glasses seem to work best with some element of lost and found. So I worked in again with flesh tones pushing the glasses out in places.

Right at the end I went back to the painting to make a couple of minor adjustments. I strengthen some of the lighting and shadow effects on Luke's face to balance it better with his brothers. I also added some text on the title of the book. 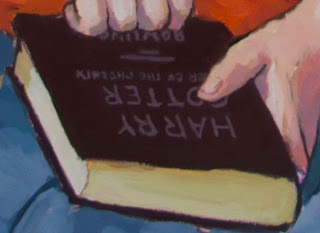 Original it was a black hard back, Harry Potter volume, that was missing it's dust jacket. I hadn't felt it needed the title on the book. But someone identified the black book as the bible. This was a problem, since my intention had been to illustrate his love of reading, not his views on faith. Adding the text was simple enough, but choosing which tomb to portray was a difficult choice. I think in reality he'd been reading 'the half blood prince' but somehow I thought this title better? 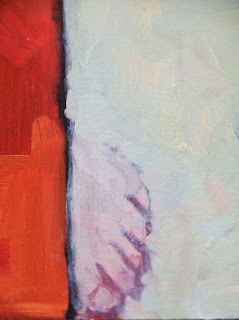 Luke's foot was an interesting conundrum, Originally I painted it crisply, then it seemed to float there and I realized I needed to move it slightly. It was better then, but still a little odd. There's always a problem with body parts that poke out from behind objects - we know he needs a foot, but it appears decapitated with it. On the other hand, if removed he would have no legs!  The solution I ultimately decided was to do a pale wash over the foot so it was still visible but less, eye catching.

These shots are good illustrations of the brushy texture I've built up on the painting, it's hard to get a feel for a painting of this size online, but maybe these sort of close images help a little? I love the texture you can build up with oil, it can give a painting such a wonderful tactile feel. 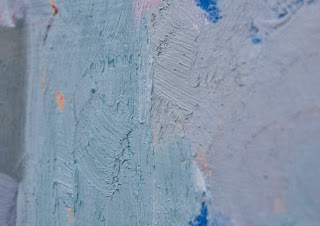 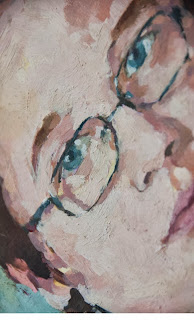 If you like you can see the portrait from 4 years ago here -
http://anguswilsonstudio.blogspot.com/2010/02/good-challenge.html

Or one I did of the boys from a photo from earlier this year -
http://anguswilsonstudio.blogspot.com/2013/06/the-instant-appeal-of-portrait-painting.html

A little painting from Point Lobos SP, just round the corner from Carmel in California. If you've never been, it's stunning. A small headland with spectacular coves and forest, visit you wont regret it! 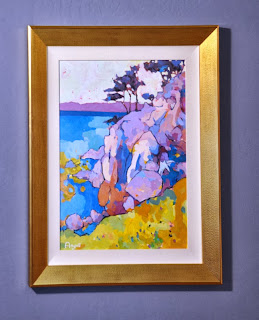 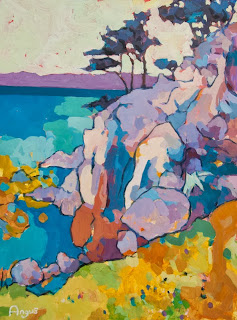 Cool Shadows with a warm breeze
24X18 Acrylic on panel
Posted by Angus Wilson Studio at 8:36 PM No comments: