After many weeks of working on other projects, I've now come back to this painting with a vengeance. This post shows my first major sitting on that work since returning to it.

You can see I blocked in all the color, filling in the blank areas of the canvas (well wood). Placing my eldests hair color, the book and picture frame (on right),  allowed me to final gauge the overall tonal range. I have now gone back and toned the chair and the bureau behind a little, to get the range closer to what I wanted. 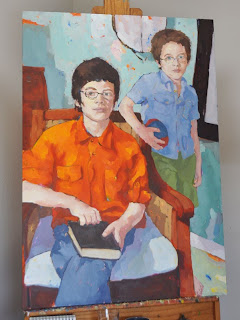 I also worked in to my youngest childs face, in previous posts I hadn't quite got his features right so I need to adjust elements to bring it into line. It always amazes me how subtle the human face is; where the smallest of changes to a nostril shape can define 'his' nose, and single brush stroke around on a lip can change the expression dramatically.

You may also notice I've blocked out the vertical from a stand light behind my youngest sons shoulder. Though accurate, the line of it fell to closely to the vertical of his shirt below. I will move this over an inch or so in time.

Few other quick things - I know in time I'll have to fix the foot in the bottom right. It's accurate, but looks too long for the body, I fear removing it will loose the figures grounding to, well the ground. Also eyebrows just placed with a quick dab, will have to refine later. Finally I really need to refine the tone of that orange shirt....

In the next post you'll see some close ups on the faces and I resolve them further.
Posted by Angus Wilson Studio at 3:17 PM No comments:

More thoughts from my travels this summer to Britain. This time I visited the Abbot Hall Art Gallery in Kendal England to see an exhibition of Graham Sutherlands landscape work. 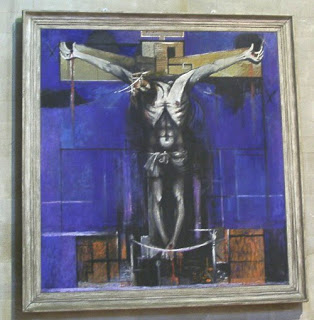 In Britain Sutherland is probably most well known for his religious pieces, particularly his depictions of Jesus on the cross and for a portrait of Winston Churchill. A painting that was so hated by Churchills wife that she destroyed it. This exhibition however focused on his love of the land and how he responded too it. 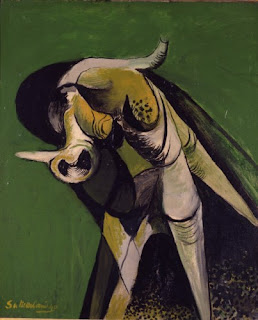 The Abbot Hall always presents an interesting and good exhibition and this was well displayed and very informative. I suppose in truth, I've never been wholly taken with Sutherlands works, (perhaps with the exception of his depictions of the cross). Too much of his work in my mind is too derivative of others. I can't help but look at his art and think of Picasso, many of his Palette choices are extremely close to the middle and late periods of Picasso's work. Additionally his structure of the figure and adaptation of its with form, is again unmistakeably reminiscent.

This exhibition does note his influences, mentioning both Picasso, and regularly Francis Bacon; and I can see that too. 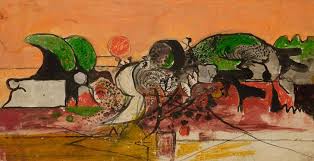 So why criticize? Well to my mind, to be inspired and work from another artists work is fine, understandable and allowable; but to be too derivative and not to advance your work beyond the initial inspiration or your peers is a mistake. Sutherland I feel is terribly guilty of this and though I like many of his paintings; I find I am not thrilled or exulted by them. The addition of the closeness to other better painters leaves me wanton for something more, and well in truth, someone else!
Posted by Angus Wilson Studio at 3:02 PM No comments:

Finished this painting a few weeks ago now, but the green back drape seemed a little insipid and I wanted to adjust the background blue.  I made subtle changes to both. This photo still shows the back drape as a pretty pungent color, but the original holds it better. 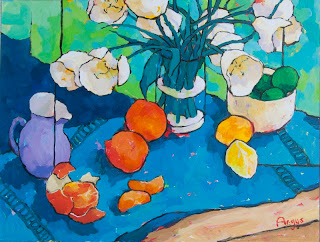 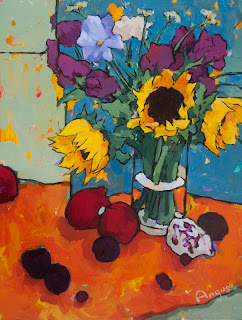 Posted by Angus Wilson Studio at 2:13 PM No comments:

Okay I know it's a bit tacky, but....  If you enter good luck! and tell your art loving friends www.anguspaintings.com 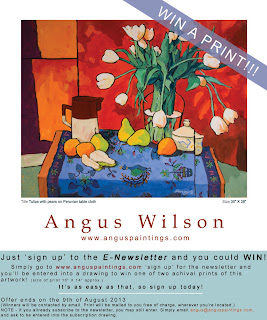