I've just returned from a weeks trip to England. Visiting my elderly parents, who sadly are both battling various forms of cancer; and achieving this with huge fortitude.  While there I took the opportunity of visiting their local art gallery/museum in Kendal (Abbot Hall art Gallery). Considering the size of the town I'm always impressed by the exhibition the gallery manages to secure, and I have seen some wonderful instillation over the years. (They have one coming this summer called 'Francis Bacon to Paula Rego' which looks really good, it's a pity I'll be in the US)


Anyway, the current exhibition was works from their permanent collection, celebrated the galleries 50 years. Featuring works from many 'big' names in British art from the last century. The art  was a  varied medley, both in content, style, period and quality. At times I fear the fame of the artists had  eclipsed the quality of that particular piece, for example I felt their was an unremarkable sketch by Henry Moore, and I'd seen better paintings by Stanley Spencer. But this was balanced by fantastic works by Lucian Freud, Ben Nicholson, Paula Rego, to mention just a few; and of course a personal favorite Joan Eardley.

The last room in the exhibition had a surprise for me and really nice mountain painting by Howard Somervell. It turns out he was a second cousin of my grandfather (on my fathers side). So admittedly that's a pretty distant relation, but still interesting... Sommervell was actually a historical figure of some note -  a medical missionary in India, he was also an avid painter and climber. He was even part of the climbing party of Mallory and Irvines fatal attempt on Everest in 1924. It's believed Sommervell was the last person to see M&I alive, before their attempted final accent. 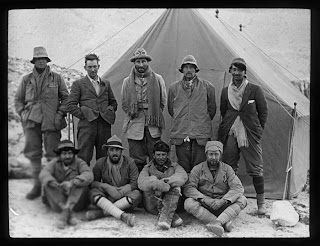 H Somervill - 2nd from the left, seated on the bottom row


Of course I'm getting of subject. I tried googling for the painting that was in the Abbot Hall, but I couldn't find it.  I did however find another couple of his paintings, so these will have to suffice. Still it's nice to think there's other artists in my family tree, and I haven't even mentioned my talented Aunty!.... (But that's a story for another time) 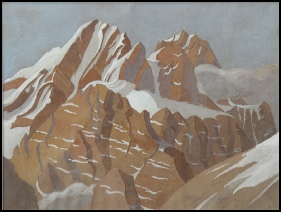 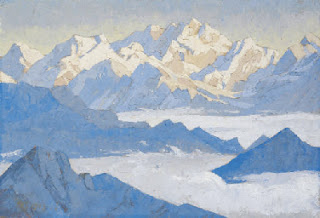 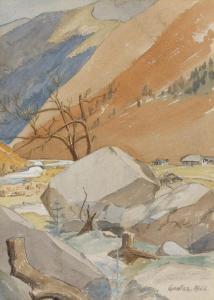 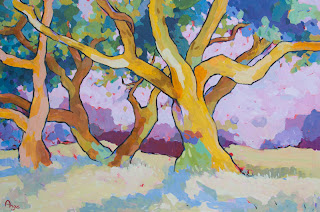 Old trunks and branches (CA)
24X36
Acrylic on board.

Back in the saddle

As I explore the many potential directions that my recent landscapes have opened up to me; in many ways nothing feels better than to paint a Still life!  In part it has that 'comfortable shoe', type feeling but more than that -  my approach to both subjects is so separate and divergent. This may be a passing phase, but I feel each subject requires a different perspective, especially in strength of palette and the way a close object is explored compared to a more distant panorama. I could ramble on, but here I'll let the painting speak! 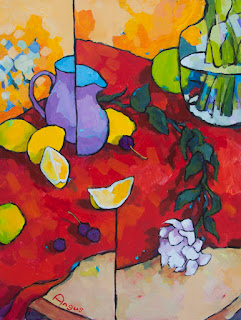 White petals and lemons
24X 18   Acrylic on board
Posted by Angus Wilson Studio at 8:41 PM 1 comment:

Winding through the forest

This is from a couple of weeks ago, I spent a good amount of time on this painting. I wanted to find a nice overall color scheme that moved across the whole forest, but that also provided some variety.  I went in and re-painted differing colors on the ground in the background a number of times till I found the right hues. I also re-established the dark river bank and the distant yellow foliage, before I was happy with the overall piece.

The following week I attempted another woodland painting, with reference material I'd gathered from the same trip, but in the end I decided that painting had failed - one to scrape down and try again... This one however I think worked out. That's painting, you can't be successful all the time!