At the risk of writing one of those blog posts with ill founded personal opinions that will follow me around for years to come, just be thankful I'm not giving a painting by painting run down....

I tend to be very 'wishy-washy' and evasive when I'm asked for my influences, and because I paint colorful still lifes many label me with Cezanne and Matisse. One assumes Matisse for the palette and Cezanne for the subject matter. I confess each have works that I like but there are many artists I prefer. However having said that, I know my passion in painting begins with the Post impressionists and though it may not end there, my first and possibly deepest love is rooted in much of this art.

So with great anticipation I took a mornings trip into San Fransisco today to see the second show of art from the Musée d’Orsay at the De young museum. It was in short, fantastic!

Earlier in the year I'd seen the first installment called 'the birth of impressionism' and had been rather deflated by it. The first few rooms had been composed of french Pre-impressionist art; which let's face it is kind of stuffy and not as interesting as what other countries were producing at the time, e.g. Goya (to name just one). Additionally the first show had been very overcrowded, and nothing spoils an exhibition more than having to fight for space to get in front of each and every painting! Plus you know early impressionism, well it's nice enough, but to me it's not as exciting as what came later!

The latest exhibition is titled as 'Van Gogh, Gauguin, Cezanne, and Beyond' which let's face it a pretty broad and all encompassing banner; well the 'beyond' bit in particular. I have to say however, they did a good job of presenting a lot of variety. Personally I can find something I love in most post impressionists, and there was lots to choose from. They had a full room of Gauguin, who's pretty good and a nice selection of pointillist paintings too with a good number of Seurats. They also presented the Nabis movement well and had a some great works that I liked by Maurice Denis and Vuillard, (more about Maurice Denis later). But best of all was a shared room featuring 10 paintings (approx.), of Van Gogh and Toulouse-Lautrec. I died and went to heaven, what could be better than Van Gogh and Lautrec in the same room! 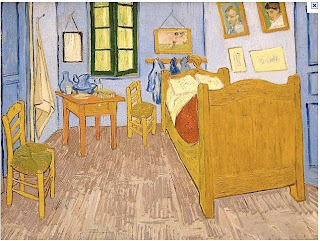 Van Gogh - Bedroom at Arles (love this room)
Other things worth mentioning - They had only one Picasso, but it was a nice one and a Still Life! In the initial room they had a few Monet, Renoir and a Sargent, which though nice, should have been placed in the previous exhibition. Plus Sargent, though a fantastic painter is a strange fit for either of the exhibitions, if you ask me. They also had a nice Degas in the first room, I probably should say he too should have been in the first exhibition, but here I'm biased. I love painters who draw with the brush, hence Lautrec and Degas are always at the top of my list. To my mind Degas always made his oils appear pastel like in their appearance, which is a style I very much admire. So you can put a Degas in any exhibition and I wont grumble. 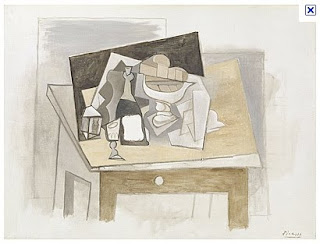 I left the show feeling like they'd accomplished a lot with such a wide range of styles and movements within the umbrella of 'post impressionism and little more besides'. It was nice to see the collection and people enjoying it, sometimes I feel people forget the importance and beauty of a period that yielded so much exploration. This exhibition served as a good reminder. 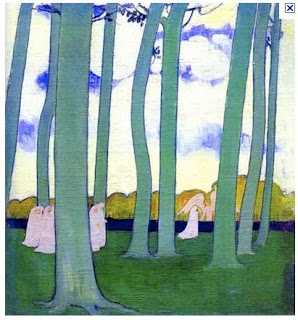 Actually I have to say Maurice Denis was a bit of a discovery for me, I really liked some of his small paintings and will be Googling him a little to find out more about an artist I've obviously previously over looked.
Posted by Angus Wilson Studio at 1:41 PM